My excitement built as we settled into our chairs to talk,. For years, I had been going to  the Farmers Market in Waco, but I’d never met anyone who knew its history—how it began and, more importantly, why it began.

Now, Bethel Erickson-Bruce—the founder of Waco Downtown Farmers Market (WDFM)—sat across from me and started to share where the idea for this now-routine Saturday event began. And I was on the edge of my seat to know how all of it came to be.

“I moved to Waco 10 years ago to live at the World Relief Hunger Farm,” Bethel began. Originally from the Midwest, Bethel lived on the East Coast before moving to Texas with a background in social work and a passion to help people engage with the agriculture system.

After moving here, Bethel quickly realized the community lacked a traditional farmers market. She recalls a small farmers market that met at the Extraco Event Center, and she initially hoped to partner with them to get more local growers involved. However, she met some resistance, and this plan didn’t pan out.

Undeterred, Bethel researched ways to begin a brand new farmers market and ultimately decided to start it as a non-profit organization. For me, this settled the mystery as to why the Farmers Market had merchandise I’d just thought it was that big of a deal in Waco (which it is), but it also helps raise money to keep the organization afloat.

Launching the Farmers Market as a non-profit brought about numerous hurdles: paperwork, approval by the Food and Health Department, and complicated logistics. Still, Bethel persisted,  and after a two-year process, her hard work paid off. The Waco Downtown Farmers Market debuted in 2011.

“We started at the riverside location, back before the stadium was even built,” Bethel recalled. “It worked out really well that we were in such a key place with such good traffic. It was such a beautiful location with the river and green space, and people could come and stay for hours.”

Currently, Farmers Market meets on 5th and Washington while the riverside location is renovated. The estimated return to the riverside will be in 2020. Bethel explained, the location was a dumping ground for the tornado, and they had to do testing to make sure nothing was toxic or that there wasn’t another mammoth laying around anywhere.

Bethel’s social work background adds a unique and important depth to the Farmers Market, one not commonly seen in other markets. “My interest has always been social work through food and how we empower people through growing their own or becoming more active in their food system,” she explained.

To accomplish this, Bethel arranged for the Farmers Market accept food stamps and offer incentives to those using SNAP. Recently, she launched a 3-month pilot program that matches SNAP spending up to $20. For example, if a person has $15 of SNAP benefits, he or she can purchase $30 worth of food at the Farmers Market.

Another special aspect of Waco’s Farmers Market is that it has become a testing ground and launchpad for new businesses. Dichotomy, Luna Juice Bar, Cheddarbox, and many other local favorites got their start serving from a market booth Saturday mornings, while they garnered interest and perfected their craft. Now, several of them have opened food trucks or storefronts in town. 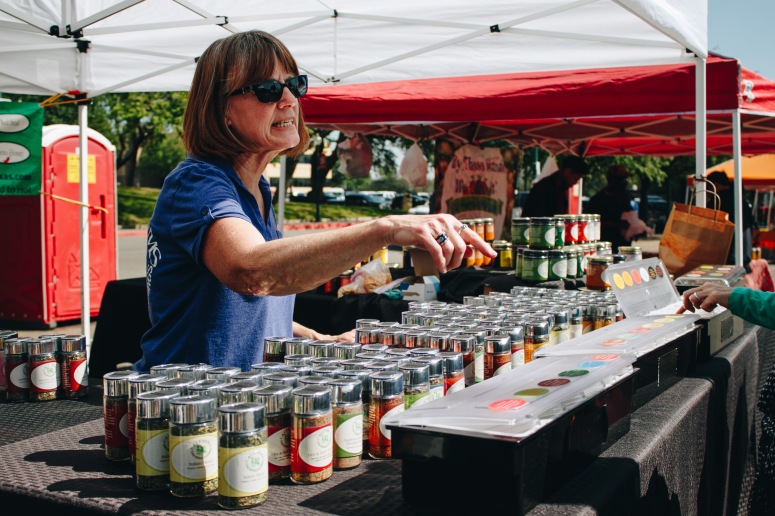 Yet even with all these wonderful things, I think what makes the Waco Downtown Farmers Market really special is the community it creates. As Bethel put it, “It became much more than a place just to go buy food…We have a Farmers Market family.” Friendships are formed, customers have the opportunity to engage with the people who grow their food, and locals meet the entrepreneurs who may one day have booming businesses.

If you haven’t had a chance to visit our local farmers market, walk around for an hour or two and get to know the amazing people who help make Waco one of the best towns to live in. Summer is the perfect time to check it out!

Allison Toy is a freelance editor and writer in Waco, Texas. She is also a Registered Nurse and passionate about both the medical field and the publishing world. She is an avid fan of chocolate and kittens and good books, and she’ll never turn down a cup of coffee and the opportunity to hear someone’s story. Allison is one of the co-founders of Karat Magazine. You can find more of her personal story on her website, www.allisontoy.com.

One thought on “WDFM: Creating Community through Local Flavors”

The Karat is a Waco-based online magazine celebrating local people & history. Each person has a story, and every story is gold. To read more about our founders and their vision, click here.