Written and photographed by Tori Freeman

“History is boring,” says Terronga “T” Weaver, shop manager of The Jockey Club Barber & Beauty Shop. “It’s one thing to hear your old folks talk about, ‘I remember when.’”

It’s something else entirely to walk into a building embracing a 100-year-old legacy. Stepping foot into the Jockey Club stirs up memories from T’s childhood of hanging around the shop and the characters within. “It’s nice to walk in now and sit back and go, ‘Yeah, I remember, and I have a story to tell.’’’

Many of today’s clients are second- or third-generation Jockey Club regulars.

Waco’s oldest black-owned barbershop, the Jockey Club, opened its doors in the 1910s under the ownership of Woodrow “Buster” Anderson. Buster’s store on South 7th Street served as far more than just a place to get a haircut. It quickly became a social hub for the black community and a harbor of respect and acceptance. In days full of racial prejudice and segregation, the Jockey Club was a place blacks could enter through the front door or drink from the water fountain inside instead of a hose out back.

“In days full of racial prejudice and segregation, the Jockey Club was a place blacks could enter through the front door or drink from the water fountain inside instead of a hose out back.”

Over the years, the Jockey Club weathered two world wars, the Depression, and a direct hit by the infamous Waco tornado of ‘53. Barbers at the time recalled pulling bodies from the rubble surrounding them. Soon after, the Urban Renewal project forced the shop to close the doors of its downtown storefront and relocate across the river to its present location on Elm Avenue. By this time the Jockey Club was run by Buster’s son’s nephew, Ben Frank Smith, better known as “Benny Frank.”

Benny Frank was one of the Jockey Club’s four barbers operating out of the shop at the time. The other three were Cicero Martin, Lloyd Dugas and Jessie B. Mayes (who couldn’t cut hair to save his life, jokes T). Jockey Club regulars fondly remember these four as “the Quartet,” and photos of the crew still hang above the shop mirrors. They were the lifeblood of the Jockey Club, and their spirits undeniably live on in the legacy of the store today.

In fact, the Quartet was so inextricable to the shop that when Dugas, the last living of the four, retired in 2011, Benny Frank’s wife and now-owner Iva Smith temporarily closed the Jockey Club.

The barber shop stayed closed just long enough for a face lift that included some minor renovations such as a fresh coat of paint for the walls and new floor tiles. Though they’ve been reupholstered, you can bet the barber chairs are the same ones that welcomed customers when the Elm Avenue location opened in the 70s. 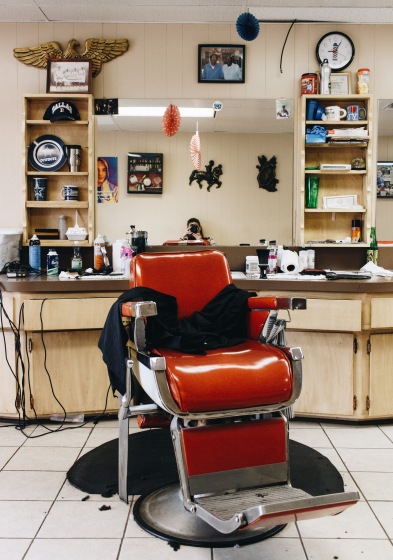 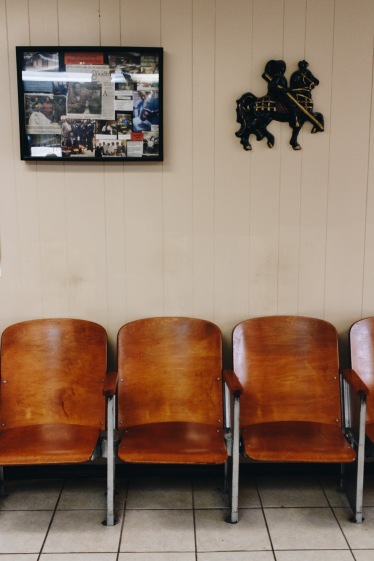 Shadow boxes on the wall display the brushes, razors, clippers, and scissors of barbers passed. The Big Red vending machine against the far wall is original; and Iva Smith will laugh as she tells you all about the faint circular stains above the seats, reminders of Jheri curls in days gone by.

Tucked away in the back office, an original cabinet holds memorabilia ranging from decades-old clippers and social club invitations; barber’s licenses and ancient bottles of aftershave. T calls the Jockey Club “a black museum no one knows about,” and staring at these relics of the past, it’s impossible to disagree.

“The Jockey Club is a black museum no one knows about.”

“There’s so little history surviving here along Elm Avenue. The stores that were here, everything has closed down,” says Iva. “This [barber shop] is still what it was way back when, and I wanted to keep it that way.”

For Iva and her family, parting ways with these historical items would sacrifice the old school atmosphere that is central to the legacy of the store. T firmly believes that being lazy is a disgrace to the people who went before her and worked so hard to keep the shop open. It would have been as much a slap in the face to Benny Frank and his predecessors to keep the Jockey Club closed as it would have been to rid the store of its relics.

But the legacy of the Jockey Club goes even beyond its museum-like items. To Iva, it’s about preserving their culture and embracing who you are. The Jockey Club is an icon of hope and inspiration.

“It’s a matter of respect. It’s a matter of pride. It’s a matter of personal achievement and community achievement,” says T. “You fought a war to get a piece of property you never received, freedom that is never actually free. To let this go, would be a disgrace to all the people who went before us to try and own something. If you look at the bigger picture of what’s going on and all I have is this little bitty barber shop…this little bitty barber shop means a lot. It’s a little seed in a city that is learning to be diverse. The Jockey Club is a well-rounded voice that is nice to hear ring out. Freedom comes at a cost but once you get it, you hold onto it with everything you have.”

Tori Freeman is a Colorado native turned Texan. She works as a part-time paralegal and creative freelancer with expertise spanning writing, editing, and photography. Tori knows firsthand how Waco can change lives—she met her husband, Braden, while working at the Hippodrome! They now happily live in Waco with their spoiled golden-doodle, Sam. You can find out more about Tori or book a photography session here.

One thought on “The Little Shop That Could: Waco’s Most Resilient Barber Shop”

The Karat is a Waco-based online magazine celebrating local people & history. Each person has a story, and every story is gold. To read more about our founders and their vision, click here.